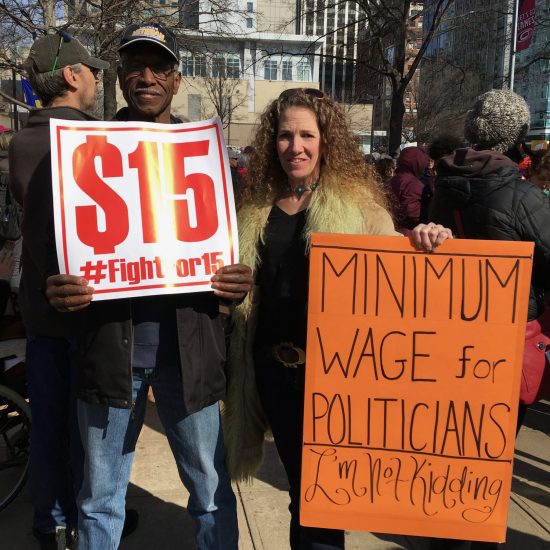 When the grocery store puts something on sale for a crazy low price just to get you in the door, that’s called a loss leader—they entice you with something you want, then they’re counting on you to buy some other stuff while you’re there. Maybe even all your stuff.

Unless you’re really paying attention and don’t get carried away, this works out better for the store than for you.

Political parties do the same thing—they get your attention with a few hot issues and then plan to keep you there. For the Democratic party, it’s LGBTQ and pro-choice issues—and for the most part, the party is indeed genuine on these.

But that’s about all they’ve got left anymore.

Gay rights and pro-choice are the Democratic party’s loss-leaders.

The party’s courting you with these two issues, and then, while you’re there, they lump all their other policies in with the things that got you voting Democrat in the first place.

I would have added workers’ rights, anti-war policies, helping the poor, and issues like those, but the party has long-since abandoned all that bleeding heart stuff to juicier returns from their corporate sugar daddies. They’re hoping we won’t notice that.

Which is the problem.

At one time, the Democratic party was the worker’s party, the social justice party, the anti-war party, the human rights for the little guy party, the justice for everyone in the world party, the help the poor party, the peace on earth party…

But it’s none of that anymore. It’s Reagan Republicanism, at best, which isn’t all that great. And which works fine and dandy for the very conservative sort who has a gay relative, maybe.

It doesn’t work so well for people who’re still hanging on to all that peace on earth stuff, and who believe that money ought to have zero, zilch, nada, nothing to do with politics, or who’re still hanging onto hope that public school in the U.S. will someday be valued instead of de-funded and privatized to its death, that workers ought to have the right to protect themselves against greedy-ass CEOs and corporate owners, and still clinging to the crazy notion that people in the U.S. deserve health care, just like the rest of the civilized world.

The Democratic party is no longer what we expect it to be, yet we’re assuming it is.

Enter the class-action lawsuit you shouldn’t be nosing around about.

So there’s a class-action lawsuit against the Democratic National Committee. It was filed in June of 2016 by residents of 45 states (45 states—oh, the irony!), and in spite of the DNC hoping the lawsuit would just go away, it didn’t go away.

The DNC is being sued for misusing our money, playing fast and loose with the party nomination, and then giving us the finger. Only they don’t say it that way in the official papers.

These are the people the lawsuit represents:

This lawsuit isn’t just about Bernie Sanders—it’s about the DNC giving the finger to all registered Democrats.

Chances are about 99% that you didn’t hear much about this lawsuit when it was filed a year ago, and haven’t heard a thing about it in the news lately.

And that’s because the mainstream media is really, really not into biting the hand that feeds it.

When asked about the lawsuit, the DNC responds with Oh phooey to it all that silly finger-pointing, and insists their charter doesn’t have to actually be fair, that it’s all just a strong suggestion and not a promise. Seriously, this is their story.

They’ve also said, and this is an actual quote from their lawyer, not my mouthy paraphrased version, “We could have voluntarily decided that, Look, we’re gonna go into back rooms like they used to, and smoke cigars and pick the candidate that way.”

Unless the Democratic party has a serious come-to-Jesus meeting, or a Scrooge-y ghost-of-the-future sort of visit and turns over a new leaf like yesterday, it’s time to start seeing other people.

See, the lawsuit accuses the DNC of not honoring our pre-nup. They cheated on us, they ran off with our money, they lost the Senate and the Congress for us, and lost most races all over the land this past November.

And of course there was that one catastrophic loss.

We didn’t get what we paid for. Literally. Whatever the DNC is doing is obviously not working.

The party has proven itself more committed to shooting at its own feet than winning elections.

At least the Republican party is a little more upfront about obliging its sugar daddies. Not that that’s endearing or anything, but we know to expect. It’s just that the Democratic party is the same way, but says it’s not.

Just remember what I’ve told you before, though—follow the money, and you’ll see the separated-at-birth similarities between our two major parties.

The parties are two sides of the same coin, shiny friends.

There were signs that our dearly loved party was betraying us—things that didn’t add up, such as:

The whole embarrassing love-fest we had with the Democratic party would be merely humiliating if it weren’t so damned important to examine seriously.

Thank goodness, I guess, for revelation upon revelation during the Democratic primary, because that’s when many of us realized we’ve been enabling our abuser. I know I did.

But even when we found them out, the scathing evidence against the party so many of us loved and devoted ourselves to just keeps coming, and the lawsuit against the DNC isn’t going away.

So here’s what I want you to do:

I want you to realize that, while there are miraculously some good and decent human beings in the Democratic party—and you may be one of them, the party as an entity is as narcissistic as our new president. As evidence, said party refuses to admit its own role in the aforementioned catastrophic election results, and instead just keeps on selling us the same ol’ shit sandwich.

I want you to start looking around for other candidates.

Gone are the days of voting a straight Democratic ticket and assuming the ‘D’ on the ballot stood for the good things you yourself stand for.

I want you to know that now and then you’re going to need to not only look at, gasp, a Republican here or there, but also candidates from various parties you may or may not have heard of.

I know it’s damned inconvenient, but you need to find your own way in this instead of turning to the manipulative corporate media to help you out. They’re scaring you on purpose so you think you have no choice but the crap they’re telling you.

Yes, we Americans like our convenience and our comforts and don’t want to be bothered with working too hard to figure this shit out. I understand this. We’re fucking tired. And we’d like to be able to count on something or someone.

But if we don’t start being about 95% suspicious of our televisions and magazines and newspapers and internet things that claim they’re real and not “fake,” this country is not going to make it.

My last post was about how to stop relying on mainstream media.

The TV is not helping you. It’s just pissing you off and scaring you. I beg you to turn it off.

Take that whippersnapper Rachel Maddow and MSNBC, CNN, and all the other networks with a fucking boulder of salt, shiny friends. They’re egging you on.

All of mainstream media is egging us on.

It’s all meant to freak us out, enrage us, and frustrate us to the point of throwing our hands up in exhaustion, so that we feel we have no choices.

So check out some of these Democratic party alternatives. No doubt there are more.

It’s okay to shop around for your politics nowadays—I’m thinking you didn’t sign anything saying you’d mate for life with the Democratic party.

Admirable folks with a solid and progressive platform. They’re on most state’s ballots each election period, and have yet to reach the umpteenmillion signatures that some states require in order to get on the ballot there. (I’m talking to you for one, North Carolina.)

This is the party Bernie Sanders brought to our attention in the 2016 Democratic primary. They’re all about a humane international society.

And here’s an article in Rolling Stone about the party’s rising popularity.

These folks are “fighting for an economy that works for all of us.” This is a pretty active party, running candidates in local races in a dozen states so far.

This party originated in Seattle and is solidly dedicated to social justice.

There’s a line in their platform that says it all—it’s basically the Golden Rule, just worded a little differently: “An injury to one is an injury to all.”

The “PIP” party was founded in March 2016 in response to the political revolution Bernie Sanders talked about, and is dedicated to supporting progressives in office and passing progressive legislation.

A special shout-out to the the PIP party for urging you to make a mainstream media detox pledge.

Hey, don’t knock it till you check it out. Most of what we know and fear about communism has been instilled in us from an early age. One might call it indoctrination. So see for yourself.

In other words, don’t count on your American upbringing and education, or the media, to educate you on everything—some things, sure, but not everything. Educate yourself on this one.

Here are some folks working for a progressive agenda and/or for radically positive change in the Democratic party—along the lines of a tough-love takeover, I believe.

Brand New Congress was started by Bernie Sanders supporters with the goal of recruiting and training ordinary citizens/non-politicians to run in mid-term elections, a strategy straight out of the right’s playbook. And I think you’ll agree it’s quite obvious we do indeed need a brand new Congress.

Together, these two are getting behind some real progressives and independents within and outside of the Democratic party. In fact, as I alluded to earlier, Brand New Congress will support candidates from any party, Republicans included, if their core philosophy is aligned with BNC’s policy positions.

This group is intended to be a network and collaboration of activist and progressive groups.  It was founded by a veteran and millennial named Sam Ronan, who ran for Chair of the DNC and was the only candidate with enough chutzpah to bring up the elephant in the room—the DNC’s choice-by-rigging during the presidential primary.

But that didn’t stop him. Keep your eye out for Sam Ronan.

Part of a group called “People for a Working Democracy,” this effort isn’t so much about getting Bernie Sanders to run for president in 2020, but it’s about starting a new party, with Bernie at the helm. Interesting stuff and good arguments in their FAQs.

Started by Bernie Sanders after the Democratic primary, this organization is a continuation of Bernie’s work and vision while he went back to his job in the Senate. Our Revolution supports and promotes progressive candidates and causes nationwide.

I like that they show post-election results so you know how the candidates are doing, not just who’s running.

Okay, so that’s it for now.

Keep fighting the urge to sit back watching the goshdamned television news, always listen to your gut, and always follow the money, ’cause somebody’s making a killing here, and it’s not you and me.

10 Comments on Democratic Party Taking You for Granted? Maybe it’s Time to See Someone New

Welcome to The Shiny Butter Blog. I'm Coco, the lady in charge. This is me writing down important things.